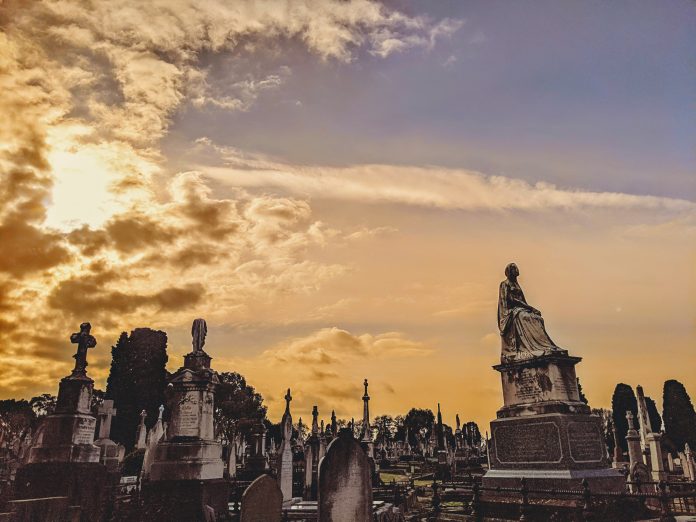 A walk among the dead of Melbourne General Cemetery.

Walking towards those gates I can’t help but feel a sense of anticipation. It isn’t anxiety. It’s not fear of what’s to come. I’m not afraid that a bunch of ghouls and goblins are waiting in the wings. No, it’s a good kind of anticipation. The kind that comes when you’re about to open your front door after a long tiring trip, throwdown your luggage, put your feet up and take a deep, relaxing breath. You’re leaving the world behind you, don’t worry, the world doesn’t belong here. Here everyone’s done with the world and there’s no one to judge because they all ended up in the same place, for richer or poorer, young or old. This is Melbourne General Cemetery.

Stepping through the iron gates, rusted and worn since 1853, it’s easy to get lost among the many cobbled paths that wind their way through this stone speckled world. Laid out in distinctive denominational sections by architect and surveyor, Albert Purchas, looking out towards the hilltops drenched in gravestones – some broken, some new, some grey, some toppled, some still standing, barely – you can’t help but think that the place doesn’t quite look as laid out as it once probably did. Now it resembles more of a gothic fairytale, something conjured in the imaginations of a Grimm.

Above the graves, watchful statues of angels and goddesses look over the dead like guardians as they sleep. Like motionless gothic beings, vigilant crypt keepers that peer over their charges, unmoved and unchanged for what seems like millennia, but for the moss that creeps across their curtained cloaks, and the ants that spiral up their arms.

Behind them, in the distance, stretched across the horizon, are the shining buildings of the metropolis, an entire world away. The buildings tell you that out there the earth is still spinning, cars are honking, pedestrians are moving, restaurants are busily serving, but here, now, there’s nothing. Just stillness. Just silence and solitude among the three hundred thousand interments spread over forty-three hectares.

A Magpie whips its wings through the air and perches atop a statue of Jesus. The breeze flutters and pushes the leaves against the pavement. The green grass is unkempt and soft. It’s odd to think that cemeteries such as this were designed as parks for people to stroll through, to sit in, not just to lay in – but mostly you hear your own footsteps echoing on paths long abandoned for more natural environments.

Strolling past the endless names carved in stone it’s hard not to imagine the people beneath the surface. The men and women, old and young, that lived their lives, had their trials, took their final steps. Some premiers, some pioneers, some soldiers, some soldier’s wives. Sons, daughters, mothers, fathers, paupers and priests. A great tomb dedicated to John Pascoe Fawkner lays here. The pioneer financed a ship of free settlers from Tasmania to the mainland. The ship, named Enterprize, reached Port Phillip and sailed up the Yarra River. Its passengers founded the city of Melbourne in 1835. Without him and those men and women, this place and its history would never exist.

The grave of a man named Percy who died in 1949 also sits here. A man who was a husband and a father and died far too young. Perhaps not as exceptional as John Pascoe Fawkner, but a man who once lived nonetheless. On his headstone are the words, “Things have changed in many ways. But one thing changes never. The memory of that happy smile. And that cheery ‘Never Better‘”. A final memory from a grieving wife.

Those that found fame are buried right next to those that died in obscurity. Some names are noteworthy and clear, some are ordinary and hardly legible, worn by the winds and the rains over the centuries. All that’s left of their lives is a number and a bunch of overgrown weeds on a mound. Sometimes so hard to make out that you end up stepping over them.

Visitors came and went once but now fewer come and more have gone. Walking through this gothic page in Victorian history you realize just how fragile those pages are. Today a few pedestrians can be seen taking their dogs for a stroll, the young use it as a shortcut home, or a place to sneak in past midnight, have a few beers, smoke a few cigarettes. And an idling wanderer pays his own tribute to the forgotten. Inventing his own memories for the unremembered.

Throughout its life, the cemetery was closed for long periods of time, reopened, closed again, extended, lodges were demolished, rebuilt, and now it sits tucked into the backbone of Carlton. Most drive past without even a second glance. But for me, there is something about a cemetery that pulls me in. Something I just can’t resist.

There is an important study of the way we treat our dead and what that says about us. Whether they’re buried in graves, tombs, crypts or large Pithos jars, we ultimately have one common trait; we long to be remembered. To be anchored to the world of the living. Tethered to life even after death. Perhaps it is a reflective causality that stems from our capacity to remember or the need to hold onto the ones we cared for.

The cultural and religious significance behind the style of graves also says much about those who inhabit them and those who buried them. The simple stone for a simple life with simple means tells us of a commoner, the middle class who saved their pennies for a plot. A butcher, a grocer, a public servant. The large black and white marble with photographic depictions are used mostly by Italian immigrants. The wealthy monuments for the rich, the well kept and maintained graves of our soldiers. The star of David, the protestant Angel, the watchful Jesus. The truth is that philosophers, archaeologists and anthropologists have been mulling over death far longer than my little strolls.

In a world with ever-changing views, a world where nothing is ever truly known, where truth itself is obscure and riddled with bias, it’s good to know at least one thing is certain. It kind of makes the living part worthwhile.

For people from all walks of life and all books of faith places like this are a part of the fabric of their beings. A deep-rooted connection with those they loved. For others like myself, they are a place to find solace and make peaceful contemplation as you stroll through endless paths, endless graves, and secluded greeneries. A remnant of our past and our present, but, perhaps, not our future.

At the end of my afternoon at the Melbourne General Cemetery, I felt good. I felt relaxed and looked forward to getting back to the ticking of the world outside. A pause is nice, occasionally, but not forever. Sooner or later you have to leave the confines of the fairytale and get back to the bustling life of the living.

There are no clocks in cemeteries. No time. The dead have no use of it. But it doesn’t mean that time, here, does not exist. The gravestones still wither, the ground still rots, the bones still waste away, and the names will all eventually fade. No matter how big the tomb, how rich the occupant, how extravagant the angel.

As I walk towards those iron gates, I wonder about my own finale. I wonder if it might be better not to be buried in a cemetery, after all. Not to have your likeness etched into stone with some arbitrary dates signifying your short existence on this planet. To minify your life and all your moments, all your thoughts, all those incredible sunsets and kisses and dreams and stories to a single stone over a single plot.

Maybe, instead, it’s better to turn our bodies into ash and sprinkle them in the winds, over a mountain or a sea, and truly go in peace. Forgotten and unknown as we were before ever having existed, taking with us all the magic and beauty of our life.

Maybe we should live while we’re alive, laugh, smile and love, and let the dead just fade into the breeze….and disappear.

The Story Of Abla.

We Tip Our Hats To Lord Lygon.

Smith & Daughters, A Cathedral Of Cuisine