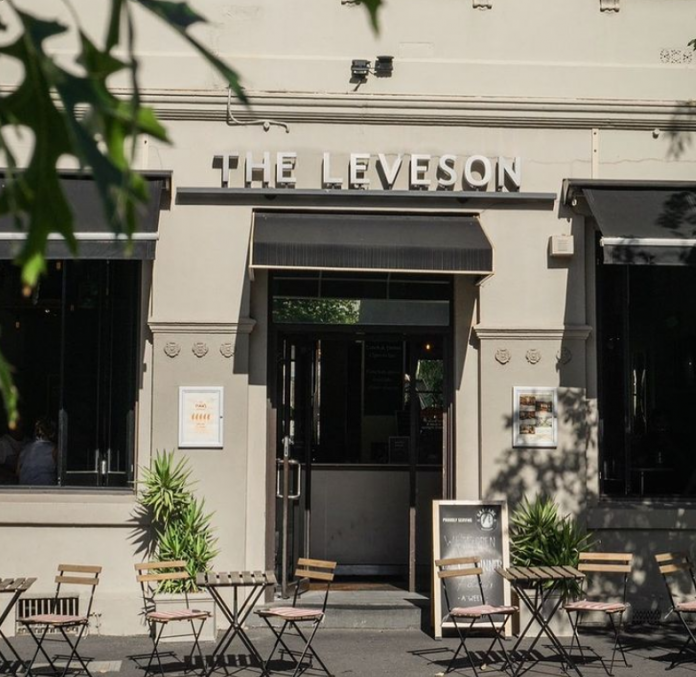 Over a decade. Over a decade the Leveson has grown, fostered, and etched its mark into North Melbourne culture. A Victorian building with Victorian features, a timestamp of hay days and history, with sandstone walls and a welcoming facade with a simple, straightforward sign above it: The Leveson.

To walk past you might think it just another pub. To think that you may not be totally wrong, and yet, you may be missing out on a pub that for over a decade has been its very own character in the North Melbourne story.

The layout, the features of this pub are, as you would imagine, somewhat typical. A restaurant, large and welcoming, with a menu of those all too favourite Australian puby dishes. Seasonal food, chicken parma, seafood paella, spicy wings, beef ribs that’ll make you wish you had a second stomach. The beer list offers your traditional beers along with an extensive list for those connoisseurs among you. Cocktails shaken and stirred, whiskey rocks or neat.

Upstairs is the function area. Full of room for those corporate events or wedding receptions. There’s a modern twist to the interior. Tall ceilings, traditional stencilled walls, Victorian classic infused with change but not so much as to render the place a salad bowl of whatever.

Yes, the Leveson is your local pub alright, but then again, it’s YOUR local pub.

Every year there’s a traditional event hosted here. Grand Final Day, Derby Day after-party, or even the Super Bowl. Friends and family get together, share a drink, some wings, and enjoy the games, talking the night away as they shake their fists along with the action on one of the TVs.

There’s a courtyard too. Our favourite feature of the Leveson. It’s perhaps one of the best little hidden gems of the neighbourhood. Great surrounding views, nice spacious rooms, heaters and retractable roof for both summer and winter. You’ll find it almost full pretty much all year round. In fact, you’ll always find smiling patrons walking in and out of the Leveson. That’s kind of the whole point of this local hub.

You see, the Levson is down to earth. It’s non-intrusive. It’s vintage, modern. It’s evening wear, yet casual. It’s a night out, yet a lunch in. It’s a cocktail yet a beer. A game, or a function, a chill drink and an enjoyable view.

Saturday – Sunday: Open from 12 till late

The Contemporary Touch Of Sutton Gallery

The Clock Strikes For Congress Wine.